Yes, they actually met on camera! This interview has already been posted on our Facebook page, but now it comes to YouTube, as part of the complete show that aired in November 1996.

After our interview of Glen Buxton (see previous posts), he became interested in what Lonesome Roadie was doing and asked if he could pitch in somehow. We thought it would be great to have him on camera again, as a host or interviewer. He agreed, and we decided we'd have him do the interview for the next national act we got - well, the first one after Glen himself...

Weird Al Yankovic was coming to Rochester (MN) for a show in October 1996. After a few phone calls to his management, and after sending them an aircheck tape of our show just testing..., they agreed to make him available to us. We were psyched!

In the late afternoon, Glen arrived at my house in Rochester. We waited as late as possible for Jim and Dave to get there from Albert Lea, but had to get going. They had called me from the road and we were going to meet at the venue, Mayo Civic Center. Glen and I arrived, found Weird Al’s manager, and told them we were going to have to start late. (Jim and Dave had some of the equipment too!) It became late enough that I actually told them we wouldn’t be able to do the interview - no cell phones then to find out exactly where they were! But, thankfully, the guys arrived, and we were back in business.

While I was setting things up, Dave and Jim gave Glen a list of questions to ask Al. (Several of them were stolen from a noon interview on Rochester TV that day...) I think it may have been Al’s idea to have it done outside. So, we setup in the park out back of the civic center. It was a nice fall afternoon. 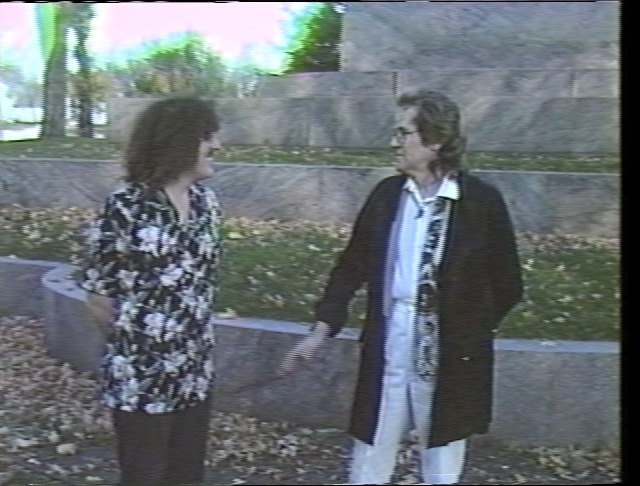 It certainly didn’t go off like a standard celebrity interview, but it was fun! Glen seemed to go back and forth between the questions written in his notebook and whatever came into his head. Al was a bit unsure what to do with this at first, but then just ran with it, and they both seemed to have fun bouncing things off each other.

After the interview, Al asked us for a copy of the interview. (I’m pretty confident we sent one to him??)  Then, Glen drove back to Iowa while the rest of us stayed to watch the show in the auditorium.

Hope you enjoy this still very early version of just testing... which includes footage of local band Damascus live onstage at the North Star Bar. Had to take out some copyrighted material, as usual. If you look closely, you may spot some vintage computers and video equipment, plus an extremely outdated music news segment. :)