Yes, this blog is still alive!  If not for my relocation to another part of the country, I probably would have gotten back to this sooner. But the posts and the videos will keep coming, from time to time.

We're jumping ahead a little here to 1997. Someone was asking about a video Jim posted on the Lonesome Roadie Facebook page, featuring clips from the "Tree Frog Festival" in Faribault. This was an outdoor festival put on at Teepee Tonka Park, which started in 1996. We don't have any further video than what appeared on Facebook, but we decided to go ahead and post the whole show that contained it. In fact, we didn't shoot that video - it was done by Imagine Studios in Waseca, a former competitor/collaborator of ours at the time.

Taking up most of this show, the second just testing... that we aired in September, were two interviews conducted backstage at Roy Wilkins Auditorium in St. Paul. 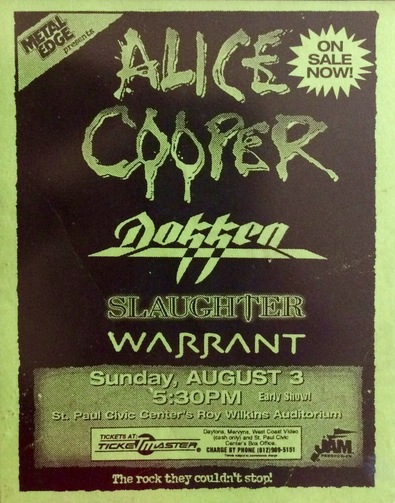 You can see the concert bill here. Of course, with Alice Cooper as the headliner, we talked with Glen (Buxton - see previous blog posts) about him interviewing Alice for our show. After some deliberation on both sides, it was decided that such an interview would be a bit awkward for both of them. So, it was nixed. However, Glen and his fiancé Lorrie would meet us there, and we (Dave Haugland and I) would all get to see Alice after the show. Just not on camera.

In the meantime, we scheduled an interview with Slaughter. Dave would do the interview while I taped it. We were also allowed to tape some of the performance.

The interview was great. Blas Elias (drums) and Tom Kelly (guitar) talked with Dave. They talked about the tour, which had just started the day before. And, about their then current album - Revolution. Interestingly, it was an early "multimedia" CD release - included on the disc were videos, photos, and other files. Cutting edge for 1997! Tragically, Tim Kelly passed away due to an auto accident about 6 months after this. I believe our interview was his last.

While we were still backstage, Warrant had just finished their set and were relaxing in their dressing room. I don't remember which one of us suggested it first, but we decided to ask if we could shoot an interview with them, too. They were more than happy to, and even offered us some of their beer while we were setting up. What followed was a pretty good segment, where Jani Lane made a few comments on the entire grunge phenomena.

In fact, Jim, Dave, and I originally wanted to air his comments uncensored. (We didn't care much for grunge, either!) The show was still airing on KSMQ, the PBS station in Austin, Minnesota. After some discussion, Mark, the station's program director, told us we could go ahead and produce it that way if we wanted to. But if we did, he was going to direct any and all resulting angry viewer comments straight to us! Not sure that we wanted Lonesome Roadie to have to deal with that, we ultimately decided to censor it. But we added a silly disclaimer afterward. Tragically, again, another of our interview subjects has since passed away. Jani Lane died in 2011. (Here is a good article about him, written five years after his passing.)

After the show, we met with Alice on his tour bus. It was the first time Glen and Alice had gotten together in several years, and unfortunately it turned out to be the last time. I intend to write in detail about this meeting later, such as I can remember after almost 20 years, anyway. Suffice to say, Alice had many questions for Lorrie, and then the rest of us kind of sat back while the two old friends reminisced. It was also the last time I ever saw Glen, leaving the auditorium with Lorrie.

A lot of melancholy contained in this episode then, not the least of which of course is that we lost Dave Haugland too not so long ago. (I've asked Jim Schneider to pen a few words about him, which will be appearing on the blog at a later date.)  All in all though, it is a pretty good show. That was a fun night at the Wilkins. So much so, I put together this little collage (which now hangs on the wall in the newly reloacted Lonesome Roadie video edit bay): 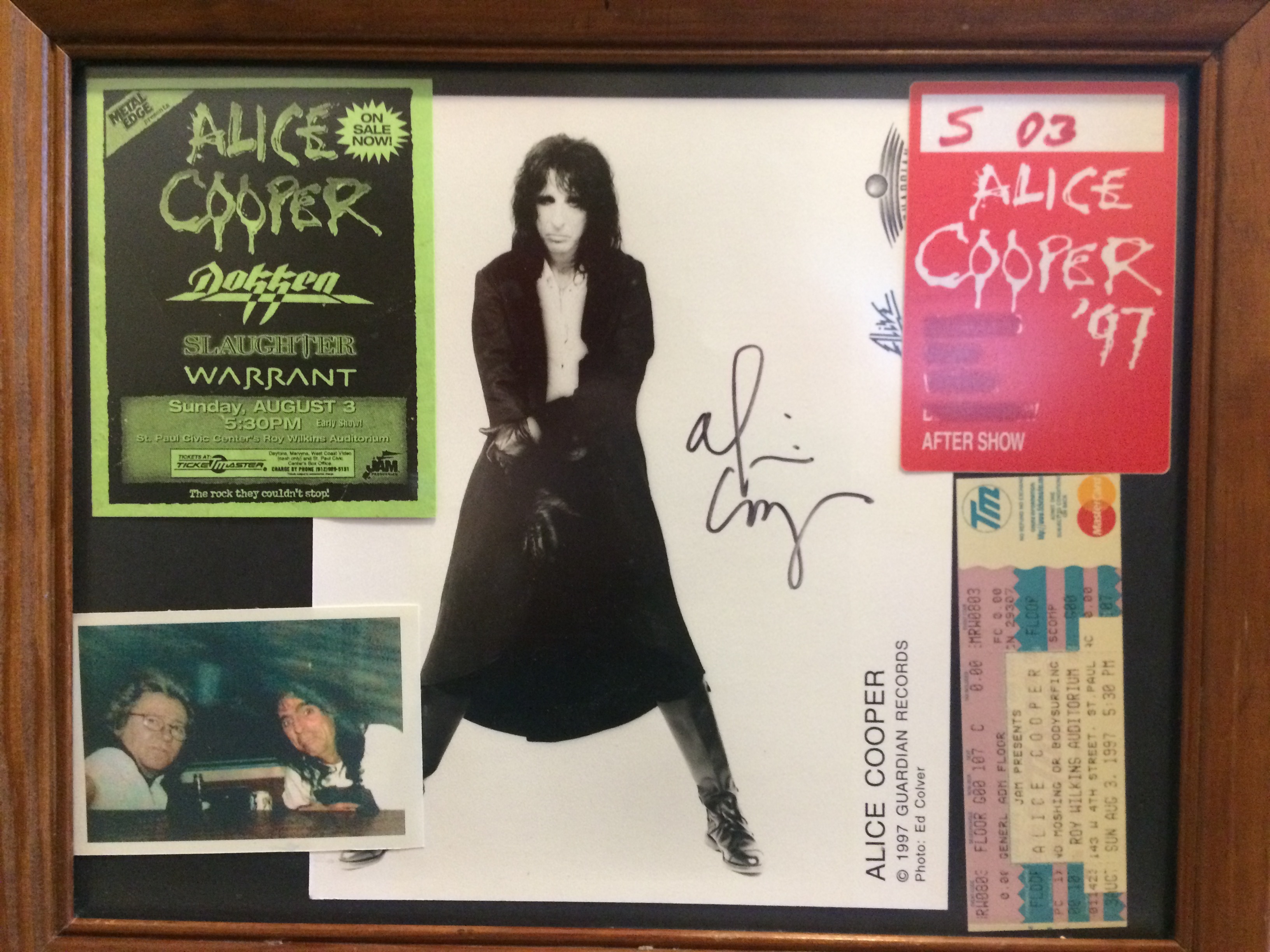 FYI, the show also included a video by Metallica (King Nothing) and one by Slaughter (Searchin') which I've had to edit out for licensing reasons. Enjoy....